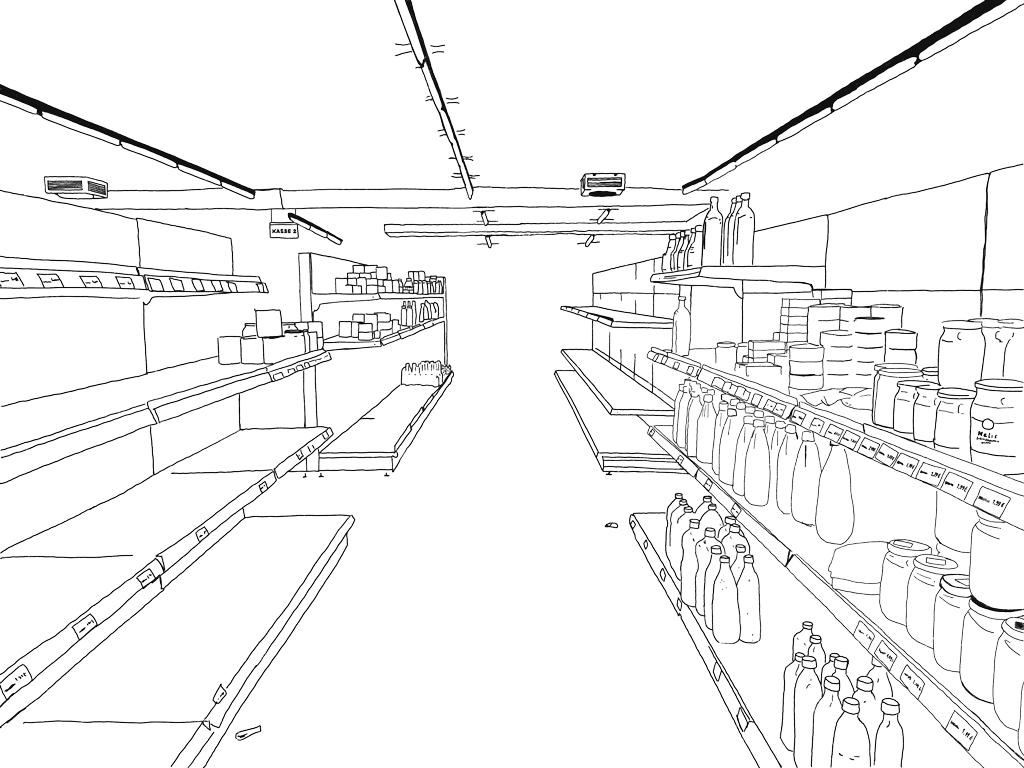 I go to the supermarket and take what I want. I put everything in a shopping cart until I have enough. At the exit of the supermarket I show a plastic card and then there is some mumbo jumbo going on that has to do with numbers. Numbers that are entered into a machine . Sure, I know of course that there is money being debited from my account, I know the story. But if I forget the story for a moment, just for the fun of it….

So there’s some mumbo jumbo going on with a plastic card. I think back to when I was a kid. As a little boy, I had to go to church every Sunday. My father took me and somehow we always stood at the back of the church. Today I my explanation is that we were always late, presumably my father didn’t want to go to church either, but he thought it was good for his son. And even if we had been on time, I don’t see my father as the guy who would have gone all the way to the front and then planted himself in the bench where everyone would see him. For whatever reason, we were in the back.

Sometimes my father would allow me to sit on the steps leading up to where the choir was at Christmas. I was grateful to him for that every time. The church was boring and a torture. Only at the end something exciting happened. That was obviously the highlight of the event, what it all boiled down to was when the man standing at the front on the stage performed the trick with the egg, which he turned into something. The man was a magician who wore a wondrous robe. Everyone looked at him when he held the egg above his head and then hid it under a cloth, under which it would surely turn into a rabbit or something, I had seen something similar on TV. Each time I stood on my tiptoes, but unfortunately I could never see it clearly, because we were standing so far back. As I grew older and wiser, I learned that it was not a magic trick with an egg, but simply a wafer that turned into the body of Christ. It took a few more decades until I realized that the notion of a trick to impress all those present was the right one.

In any case, I have to think about this every time I stand at the checkout in the supermarket. The thing with the card is also such a magical moment, a story to which we have become accustomed and which therefore seems completely normal to us, but when I try to understand it I can only marvel at the miraculous mechanism that people have invented there.

If you didn’t have to pay at the exit, I, like probably everyone else, would take all kinds of stuff from the shelves, stuff that I don’t even need. I would probably drag too much stuff home and end up throwing it away.

The plastic card mumbo jumbo seems to, if not prevent that entirely, at least limit it considerably. We take what we need.

Super system. The monkeys have thought that one up neatly. So that I monkey no longer have to run into the forest to laboriously gather the stuff I need for breakfast, but only have to push a shopping cart into the supermarket to take the stuff from the shelves, ready to spread and portioned.

But it gets even more awesome. The monkeys who have not invented supermarkets, that is, the monkeys who still sit in the forest on trees, they always eat the same. So not always exactly the same, but always what grows in immediate vicinity on the trees or elsewhere. Modern monkeys like us, with our supermarkets can eat what grows anywhere on the planet, and of course we eat only the best.

I noticed this after visiting friends in Switzerland. They had such a great salt, with herbs in it. The herbs came from Italy and the salt from the Himalayas. “Wow, I’ve never eaten such a great salt before,” I said, and when we were back home my wife found the salt in the supermarket. The greatest salt in the world now sits in our kitchen. And if there is really something that is not available, you can order it on the Internet. Again, with some mumbo jumbo with a plastic card and numbers, only you don’t even need a plastic card and you even get the stuff delivered to your home and carried up to the third floor. It’s all very convenient. If I had to go all the way to Italy myself for the herbs and had to scrape the salt out of the Himalayan mountains, of course I wouldn’t take the trouble.

We modern monkeys, we all hang in such a system. The system that we monkeys have thought up ourselves and developed over thousands of years. The system, it is so complex and wonderful that one could shiver with awe. Curiously, most people complain about it all the time or say that it’s terribly unfair because there are far too many who can’t go to the supermarket and eat the best salt in the world. And there’s truth to that, of course. The system doesn’t work equally well for everybody yet. But I would say the system is working better and better, and if you look back in time, you can see that it works better and better over time, and more and more people around the world are benefiting from it.

To the monkeys in the trees, this should all seem like a miracle. If they had a word for miracle.